Ahh - cool mountain air - camping in Northern Arizona on the Mogollon Rim is an absolute joy!
Paul and I have been planning this weekend for a little bit - we wanted to get away to somewhere cold. Somewhere where I didn't have phone service. Somewhere deep in the pines. We chose a favorite place of Paul's up on the Mogollon Rim where he has camped many times before. It's been well over a decade since I've been up on the Rim - I used to go up to Greer in my younger days to stay when I would go skiing at Sunrise - my favorite Arizona ski resort. But it's been a very long time. I've camped up this way before, but it's just not an area of Arizona that I've frequented over the years.
We loaded up Lewis & Clark and her matching trailer (for sleeping - we were expecting snow) with all the things we thought we would need - and some stuff we probably didn't. On Friday afternoon as soon as Paul got off work, we packed up and left town. There was clearly a storm blowing in, but we beat all the traffic heading North into Payson, stopped for a bite to eat at Sonic in Payson while I told Paul about "historic" Payson, fueled up, hit up the casino to use the bathrooms (eww - they still allow smoking in there), and got back on the road to head out to the Rim Road.
As we headed out of town, it cooled down drastically - there was a great deal of cloud cover and the wind was blowing.  As we turned off on to the Rim Road, it was clear it was going to rain, but we still had about an hour of driving to do to get to where we wanted to be - buried so deep we wouldn't see anyone else out there the entire weekend unless we wanted to!
We considered ourselves extremely lucky when we first pulled off the main Rim Road onto FR91 - shortly after pulling off, a GIANT elk bound across the road right in the path of our lights, and stopped about 30 feet into the woods and just looked at us.  We took a few pictures - although none are great - but he was majestic!  He was largest elk we would see all weekend.  Shortly after seeing this magnificent creature, we saw another run across the road far in front of us - we watched his eyes flash at us as he moved through the forest over toward Gentry Ridge.  Two large bull elks in less than 30 minutes - I knew this was a sign of a fabulous weekend!! 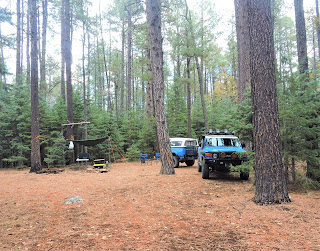 As we pulled into the first area we had marked for camping, we realized it was already taken - it was dark, but there was a small camper and a truck parked there.  So we left and went further into the forest and up FR91 to FR40F.  This is where we saw the "Blair Witch" tree - so named because it just looked creepy and out of place.  And because I have a penchant for calling odd things in the forest "Blair Witch" stuff.  Paul had a number of waypoints marked for possible campsites - most of them fairly close to where Sasquatch sightings have been reported.  Paul pulled us into a gorgeous campsite off FR40F, and it is pitch black out.  With all the lights on the truck, we quickly set up camp - and it starts to rain - so we decide to go ahead and jump in the camper and try to go to sleep.  I instantly fell asleep to the soft patter of the rain on the camper shell with the wind blowing through the pines.  Throughout the night the rain got harder and the wind blew louder - but the camper was cozy and warm and I slept fairly well.
We woke up like clockwork at 4 a.m. (that's when we get up during the week) but we both decided to snooze a bit longer.  At 7 a.m., we both woke up, jumped out of the camper to the stunning beauty of pine trees that were four or more stories tall with trunks I can't wrap my arms around - a light breeze blowing - 41 degrees outside, so it's chilly - but we finished setting up camp, and I made breakfast.  Applewood smoked, thick cut bacon and scrambled eggs with tomatoes, onions and mushrooms.  A high protein (and to be honest, high fat) breakfast to get us through the day - man, nothing smells better than bacon cooking in the woods!  We eat to our heart's content, put everything under the tarp, unhook the camper and decide to go exploring for the day.  First, we walk a long loop around our campsite - maybe a mile or so of just following random roads/trails admiring the patches of aspen trees until we get back to our campsite.  The smell of pine and wet aspen remind me of Colorado...
Now last night when we pulled off the highway onto the Rim Road, the truck started making a squeaky noise.  I thought it was the camper - it sounded like an old creaky truck - but when we parked to set up camp, Paul crawled under the truck and discovered it was a ball joint.  I was worried we shouldn't be doing any bouncing around with the truck - but Paul said we would just watch it.  Once we knew what it was, it became a VERY annoying noise - I think because we both were constantly reminded that Lewis & Clark wasn't feeling her best.  Poor gal - we've put the trucks through more in the last 6 months than I think either of them have done in the last year or two - we go out almost weekly now - but the last thing Paul was wanting to do was replace a ball joint before we totally redo the suspension on her (which he isn't quite ready to do yet - Calamity Jane has LOTS of mods coming up over the next two weeks - so we are focused on her right now - not Lewis & Clark).
Anyway - annoying noise continuing as we head North on FR40F, we start out to find all the cabins I had located in the general vicinity.  As we are bouncing through the forest, 4 or 5 elk cows come bounding down the side of the mountain, across the road, and down to the meadow below - it all happened too fast for me to grab the camera - but again - we felt absolutely blessed to have seen more elk!  A sign of a healthy forest and a sign of how deep into the forest we really were...
The first cabin we find is at Double Cabin Springs - and what a gorgeous setting.  The cabin at Double Cabin Springs (just passed Besemer Crossing) has no roof, but clearly has a long history - we spent quite a bit of time reading all the carvings in the wall, admiring the building of the structure (huge hand-hewn logs dove tailed together) and checking out the surrounding area - there is a huge fenced in area that surrounds a bog area and the spring.  We never did find the second cabin - not sure if it even exists any more.  But we bounced along on a gorgeous un-numbered route until we hit the 115 (major graded dirt road) that heads up to O'Haco Lookout Tower and Ranger Cabin.  It isn't currently being used, and is fenced off, but we walked the perimeter fence because it was absolutely gorgeous out - big fluffy clouds in the sky with bright spots of blue showing through - a slight wind - and cold enough to wear our North Face jackets! 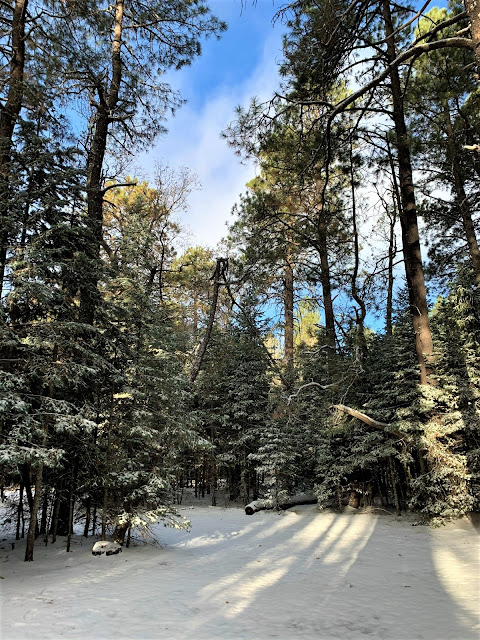 Posted by Arizona Backroads Girl/Scuba Mom at 8:20 AM