So today we did a level 1 backroads trail to a couple places I've already been, and then expanded it to include a full trail I've never been on, as well as a dam and a corresponding bridge that is on the National Register of Historic Places.


Our day started out early - the weather was beautiful (it was a cool 91 degrees in Phoenix yesterday, with some light rain).  We took the old MC-85 (otherwise known as Buckeye Road) to Buckeye to grab the I-85 South to Gila Bend.  As we pulled into Buckeye, I decided to show the troops a neat, little known artifact in Buckeye.

Hobo Joe.  A giant, fiberglass statue from the old Hobo Joe coffee shops here in Arizona.  It is on private property and stands in front of a meat packing plant, but is still a most interesting piece of history - and it is the only one in existence today...the Hobo Joe coffee shops have been closed since, I believe, the 1970's.  For more information on Hobo Joe, visit Buckeye, Arizona's Historical Places.

After leaving Buckeye, and driving the 30 minutes or so to Gila Bend, I kept reminding the girls to keep their eyes open for the spaceship.  They were glued to the windows of the truck looking for the spaceship in Gila Bend.  Apparently the Best Western Space Age Lodge wasn't as impressive to Bailey as it has always been to me.  Space Age Lodge  Bailey's comments were as follows:  1)  "Mommy, that was stupid"; 2) "Mommy, really - that didn't even look real"; 3)  "Mom, you wasted the whole day making me look for a spaceship that isn't a real spaceship.  Can we go home now?"  My child had no imagination this morning...I thought it was funny.


We drove on down I-8 towards California, and got off the highway at Sentinel.  It used to be that Sentinel was just a small, dumpy stop on the freeway with an abandoned purple gas station.  Now there are a few mobile homes, and a gas station and store that are in business.  The old purple station still stands across the street, lonely and abandoned.  And very purple.

Our first official stop of the day was at the Agua Caliente Pioneer Cemetery.  It is a very well taken care of cemetery, with burials ranging from 1896 through 2007 (at least the ones we could read).  Interesting info on those two graves...same last name.  Possibly related?  Who knows...but interesting, nonetheless. 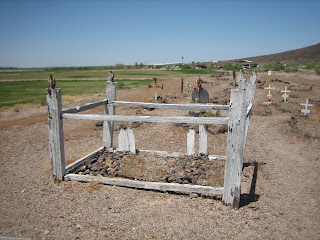 There were lots of graves...many marked, and some were obvious, but not marked.  I would assume there are a number of non-obvious and unmarked graves as well.  It is a large cemetery, and is apparently still used today.  There were a number of flags on graves, obviously left over from memorial day.  One small "plot" area was interesting...small graves, and the headstones were wood.  No obvious markings on them at all - no idea who was buried here, but the graves are tiny, and there are two.  One can only imagine the sad possibilities.

After leave the cemetery, we venture over to the resort itself.  The hot springs, which have since dried up, were used for years and years by the Indian people and the Spaniards long before the white man came and "harnessed" the water.  In 1897, a 22 room hotel/resort was built.  During WWII, a large stone pool was built to help assist in the healing of soldiers.  It was shortly thereafter that the springs dried up due to the farming, irrigating, and other natural and human causes.  The pool is now empty, and is marked "No Trespassing" - the resort itself doesn't have any no-trespassing signs, however, there are "keep out" signs all over the buildings themselves.  We took our pictures of the out-buildings and the resort buildings themselves, and moved onward, as we were just at the start of our trail.

A mile or two around the bend was Hyder.  Now, I've read that the little cabins out there are steambaths, however, I have no actual proof of this...just what I've read on the internet.  What I do know for a fact is that those buildings are the location of some of General Patton's exercises in the Arizona desert.

General Patton used several locations in Arizona for training of his troops in WWII.  Again, these are on private property, and we were unable to go in and look at the cabins.  We were a little bummed, because last time I was here there were no mobile homes or other individuals living here and I had hoped to be able to walk around, but such is life...

We now have two girls who are disappointed because were didn't see a "real" spaceship, they couldn't go swimming at the hot springs (even though I told them that the hot springs don't exist anymore), and their slushies are melted.  Life is so hard when you're 7 and 10.  AND, most importantly, we still have several hours of driving to do before we are on the "road to home," as Bailey says.

We continued on the graded dirt road (we are in the truck, by the way, not on the quads - it's just too hot for the quads right now) and found the old ghosttown of Sundad.  There is nothing there...just some rocks that outline the name "Sundad", some old foundations, and a number of mine shafts.  Not much is known about the ghosttown at Sundad...except that at one time, it was under consideration to be the location for the State's sanitorium (santitorium meaning tuberculosis hospital).  The girls found it to be very boring (of course), and were getting frustrated with Randy and I's attempts to find SOMETHING to explore.  Well, in all honesty, Randy and I were getting frustrated too...but we forged onward!

We drove on and on and on...the road was well graded, and we felt certain we would find something interesting.  We saw the 4th of July Butte (named by a group who picnic'd there on Independence Day in the late 1800's).  We saw the Dixie Mine and some foundations there.  We drove and drove.  On the most boring trail ever.  However, it WAS beautiful, and would be fun if we had the quads in order to explore some of the side trails.

Eventually, however, we made it back to the Old Highway 80.  As we drove up to Old Highway 80 (considered a scenic route), we passed a large dairy ranch, recently abandoned.  However, it was green and lush in the valley, as the Gila river was flowing - very full, very wide, and making everything green!  As we turned onto the Old Highway 80, I realized we were in Arlington, an old farming community...there was lots of old, neat farming equipment, mills, and plants.  We enjoyed driving around the small community looking at the farms and old buildings.  It reminded me of driving around Wyoming.  Two story farm houses, barns, out buildings - it was lovely.

I have, however, saved the best for last.  Even the girls would agree with me on this.  I had read somewhere about the breached Gillespie Dam...it was roughly 3 miles South of where we came off the Agua Caliente trail, so we decided to go see it.  As we rounded the corner, the huge Gila river loomed before us, with a gorgeous gravity fed spill dam strung across it, with a 150 foot break on the West side.  We went around the hill on the East side of the river, and as we came through the turn, a lovely old bridge appeared before us!  It was the Gillespie Dam Bridge.

The dam was built in 1921 by a local rancher to replace another structure.  It was built primarily for irrigation purposes.  Because the river crossing was also a major crossing over the Gila river, the predecessor to the Arizona Department of Transportation built a concrete "apron" on the South side of the dam (part of which can still be seen today) for vehicles to go across the river bed.  Then, in 1926 the Highway Department built a steel truss bridge over the river bed in anticipation of the US Highway System formation.  Upon completion, it became part of US 80, and at the time, was the longest highway bridge in the state of Arizona.  The highway was decommissioned in 1956, and then the bridge became a county bridge.  In 1981, the bridge was added to the National Register of Historic Places.  In 2007, it was named by the Arizona Preservation Foundation as one of the top 10 endangered historic places in Arizona.  Due to the deterioration of the bridge, and because it is still basically standing as it was built in 1926, it is in serious need of repair, and in danger of being destroyed in a flood.

In 1993, a 65-year flood rushed through the Gila River bottom, and for unknown reasons, the Gillespie Dam broke - a 120 foot part of the dam fell into the river.  Due to this breach in the dam, and the resulting flood waters, 3 natural gas lines were exposed, and later were severed.  The bridge, however, survived, and was deemed safe for travel after.  There are dirt berms throughout the South portion of the river below the dam in order to assist in the diversion of waters to the canals.  It is possible to walk out there, although it is posted as belonging to a local ranch.  Fishing is discouraged due to the all the chemicals in the water that have washed down from all the farms.

From across the concrete apron, we could see the mud-swallow nests, and watched the birds flying in and out of their nests that were hanging from the arches of the dam.


We had a lovely time at the dam, walking around, watching the fish jumping (there are bass, trout and sunfish in the Gila River at this juncture).  The girls enjoyed it, the clouds were overhead keeping it cool, and it was a nice finish to what started out as a mostly boring day!

Posted by Arizona Backroads Girl/Scuba Mom at 7:45 AM No comments: