So after the excitement of Barker Ranch, we now needed to race up and over Mengel Pass and down to the cabins in hopes that we could get one for the night.  Specifically, we hoped to get the Geologist's Cabin - but in reality, any cabin would work!

So we left Barker Ranch, and backtracked a short distance to the turn off North into Mengel Pass.  At first, the road seemed fairly tame - a little off-roading here and there - then we caught up with the Jeeps in front of us, and then the rock crawling began.  Both of the Jeeps in front of us were towing a trailer - but the FJ crawled right along - in fact with more apparent ease than the Jeeps.

Paul and I poked around Warm Springs for quite a while.  Paul hiked up to the actual spring itself, which was a scramble up the side of the mountain.  The water is not hot, but is warm, and stays warm all the way down the mountain to the ranch/camp houses.  It was used to fill the pool back in the day, and has made for a beautiful, lush, green oasis in the middle of the desert.
After we finished checking out the Warm Springs Camp, we headed over to the Warm Springs Talc Mine - a large operation that winds in a corkscrew down into the mountain.  Paul, being the daring individual that he is, went in.  I stayed outside - you know - for safety reasons.  And because I'm a scaredy-cat.  But I found interesting things to look at nonetheless - and Paul and I were in communication most of the time through the radios.
After Paul finished his mine explorations, we decided it was time to head out.  I had remembered reading about the Tocopah Hot Springs and we decided we would try heading in to Tocopah and see what we could find!
As we aired up the tires and had some lunch, we said goodbye to Death Valley, and drove in to Shoshone, California.  Here we fueled up (at a rather obnoxious $4.58/gallon) and then drove down to Tocopah.  Tocopah was wonderful - we found a little resort that would allow us a day pass for soaking - and we got to soak for an hour or so, which was incredibly refreshing after a week overlanding in Death Valley.  There isn't much else in Tocopah, but then we decided to drive in to Las Vegas, grab some dinner, and head home.
This was the longest trip I've ever been on - camping.  And as it turned out, it was amazing!  After a year of me telling Paul "I'm not the camping type" - he got me to spend 5 consecutive nights on the trail - enjoying the stark beauty of Death Valley.
And I loved it.  Death Valley - we will be back! 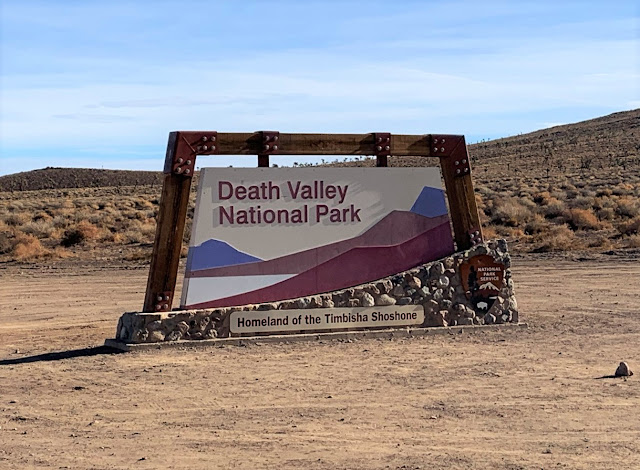 So after a rough night's sleep in the wonderful World Beater Cabin (rough because the wind was howling and blowing smoke DOWN the chimney into the cabin - not because of the cabin), Paul and I decided we were going to get up while it was still dark and finish watching Helter Skelter.
As we slowly started to move around the cabin, Paul noticed a lightning fast movement when he picked up a piece of wood.  There was a little tiny mouse living in the wood pile!  Not more than a couple inches long, and cute as a button, Paul and I sat on our cots and watched him watch us for a bit.  As it was freezing outside, and he kept climbing up on the top piece of lumber (right underneath the stove), we assumed he was trying to get warm.  We decided to just enjoy his company, although obviously we double checked that everything was sealed up tight, etc.  It was - so no worries on feeding the little guy - but again, we think he just wanted to be warm.  We named him Mr. Jingles (after the pet mouse in The Green Mile - a movie we both love).
I decided to make biscuits and gravy this morning as we had a nice little kitchen area and a new can of propane to try.  By this time, Mr. Jingles is warming up and is hanging out over by me (because I have the food) so I'm having to make sure every little crumb is picked up and the trash can lids are sealed down tight.  I don't mind - he's not hurting anything, and it IS cold outside...we are still occasionally stopping everything and watching him run into a hole in the floor...
Our Coleman camp oven, which didn't work as well as we had hoped a couple nights ago, worked great this morning - so clearly, you need a full can of propane and some high heat to make it work well.  I had some canned biscuits left over from Christmas, so I popped those into a little pie tin I have in our mess kit, and cooked up the biscuits.  They didn't cook quite evenly, so I checked on them frequently, turned the tin around, then turned the biscuits over in the pan.  But for a camp oven - hey - it worked out great!  And it got HOT!  This is definitely an addition we will use for camp cooking in the future.
Meanwhile, I cooked up the remaining sausage, and got out the flour that I purchased in Panamint Springs.  I forgot to bring milk, so we use my "creamer" - which is actually heavy whipping cream that I then water down - to make milk.  I threw some pepper in, a little bacon grease, and made up some delicious gravy to go over the top of our biscuits!
After we finish up breakfast - I decide it's time to wash my hair - it's been four days.  And Paul wants his washed too.  So I heat up some water from our water can on the trailer, and we wash our hair over the sink in the cabin.  The World Beater Cabin doesn't have running water, but it does have a sink that drains out and down into the wash.  So we sparingly use water and shampoo, Paul's hair dries almost instantly, and I put my hair up in braids, and we start breaking down our camp.
After everything is packed up and we said our goodbyes to Mr. Jingles and the World Beater Cabin - by far the nicest cabin we've ever seen, we head back down.  We stop again at Claire Camp to take some better photos, and then head down Pleasant Canyon to Ballarat.  The ride down Pleasant Canyon is - well - pleasant.
We stop for Paul to check out some potential mine adits (none of them panned out), and as Paul jumped back in Lewis & Clark and took off from the last one, he suddenly says "hey - did you see that guy?"  I was like "what guy?"  Apparently there was some guy that waved to us.  He was walking on the side of the road.  No vehicle in site.  No idea who he was, but he wasn't under stress.  Just waving hello.  We are several miles up a canyon from the nearest "living" place...so who knows who Paul saw - because I didn't see anything or anyone (insert spooky/scary music here...).
Once in Ballarat, we stop as we wanted to take a look at the cemetery, the old jail/morgue, and the Tex Watson Power Wagon.  As I stated in Part 3 of my blog, I have some pretty definitive proof that this is not actually the Power Wagon that Tex Watson used to escape Barker Ranch, and then in turn got stuck in the mud flats outside of Ballarat.  This Power Wagon WAS likely up at Barker Ranch, but the one that Tex Watson used was purchased by a local miner, who took it up to his cabin and promptly took it apart.  It is believed that part of the Tex Watson Power Wagon is buried in the canyons, or abandoned and rusting back into the Earth.   But it's still a cool truck - and to know that part of the Manson family used this Power Wagon - well, that just makes it a bit creepy...and it makes for a great marketing point for Ballarat - which is clearly holding on by a thread.

We poked around Ballarat, saw the old jail/morgue - which didn't look very secure for a jail (it's been rebuilt), and then moseyed over to the cemetery.  The Ballarat Cemetery has some interesting characters buried in it.  The most "famous" is Charles "Seldom Seen Slim" Ferge.  Slim was a prospector in the Panamint Mountains.  He was born 1881 in Illinois, and moved to the Panamint Mountain area sometime between 1913 and 1917.  He was known as a cantankerous old recluse who was the last official "resident" of Ballarat.  He was another miner who didn't believe in showers or baths because they were a waste of water (a limited commodity in Panamint Valley!), but did take one annually.