Well, this Sunday's little trip turned out to be a very interesting one, indeed.  Originally, Randy and I were going to take the girls to the Cochran Coke Ovens via the Battleaxe Trail (going in from the East side, South of Superior instead of from the West).  But due to the rains, and because part of the Battleaxe/Coke Oven trail runs along the river bed, we decided it was a bad time to do so...


So - at the last minute this morning, we decided to try the Fort Tule/Tule Creek Homestead and Riparian area North of Lake Pleasant.  It is listed in the Wells book as the easiest of the "Moderate" ATV/UTV trails.  The girls were excited - they saw the pictures and couldn't wait to go see the old homestead.  Randy and I were looking forward to a nice, leisurely ride with some extra time to perhaps go check out Indian Mesa and TipTop and/or Gillette.

So we head up past Lake Pleasant on Castle Hot Springs road.  Its muddy, and Castle Hot Springs road was closed at the intersection to Cow Creek road.  But we finally park, unload the quads, and head out.  I am the navigator, as usual, as I have the GPS, and I have put in all the way points starting with waypoint 4, which is the first major intersection we should stumble upon.

We ride up the road that indicates "Humbug Creek" - I am certain I know where we are going.  We ride on - its beautiful out.  Because of the rain, there is no dust, and everything is green and bright and beautiful.  I check the GPS - 1.29 miles to waypoint 4.  We keep riding until we reach a gate that has the road closed.  I check the GPS - we are now 2 miles from waypoint 4.  We start realizing I missed a turn somewhere... 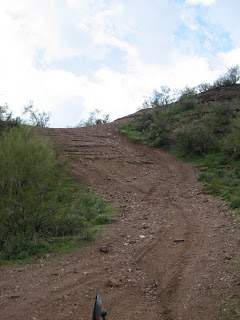 We decide to ride back and start over...but as we ride back, we check out a few little side roads to see what is down them.  We go down one, and head down a nasty rock ledge that Randy had to take both quads down.

When we get to the bottom, we stop for a snack, and the rain starts pouring.  Randy rides ahead and realizes we cannot get out the way we came, or the other obvious way out - one has a four foot high rock ledge, the other is steep and Randy almost went over coming down it.

The girls and I wait patiently for about 20 minutes or so while Randy rides down the creek bed.  The girls are upset, afraid we won't be able to get out.  I keep reassuring them we'll make it.  I'm just hoping Randy finds a route I can handle...

Finally, he comes back, and says he found a road out, but that it has a few areas that are going to be iffy for me, but he'll help me over them.  Mostly, he says, we are going to be following a narrow trail/ledge along the edge of a canyon that the river is running in.  We forge ahead...

The canyon was beautiful.  It was terrifying.  But it was absolutely easier than the alternatives.  About 1/2 way through the canyon, it occurs to me that we may be down an "optional difficult route" listed in the book off the Tule Creek route.  I'm thinking maybe we'll still make it to the homestead, but I'm just not sure.

We make it back to where we can cross the river, and I decide to check the GPS.  And guess what - we are at waypoint 4.  In the book, it clearly says not to take the East route because it is a difficult canyon run back to Lake Pleasant - I was right!  We just came up the "optional difficult route."  Well, with the difficult route already done, there can't be much else that is hard, right?  Right!

We decide to attempt the homestead now that we know where we are.  The route is 99.9% easy, with some low level moderate rocky areas.  We fly through it, and the rest of our waypoints match up perfectly.  As we pull up to the Riparian Area fence, we are all getting excited as we can see the chimney of the homestead.
The Riparian area was stunning - green, wet, and seemingly untouched.  It has been beautifully taken care of, and it is clear that this riparian area is thriving.  The homestead itself is fascinating - three rooms with a porch, across the "road" is a workshop.  The girls were so excited to actually see the building we saw in the book.  We explored around, we looked at some quartz, we looked at a bunch of mica pieces.  We discussed how gold and quartz tend to be found together.  We snack on the last of our crackers, have a juice or iced tea, and decide to start heading back.  We've already been riding for 5 hours, and we wanted to get back home in time for bedtime.

The ride back was fun, quick, beautiful and uneventful.  There were lots of side roads we wanted to explore, but again, time was not on our side today.  We got back to the truck, loaded up, and headed in to town for Pizza, our usual stop after riding around North of Lake Pleasant.

Today it was so nice to see an area so beautifully taken care of.  Its unfortunate that we have to assign areas as preserves or riparian areas in order to keep people from destroying these natural habitats.  But if, as the sign says, it is our tax dollars at work, I'm more than happy to keep paying those taxes!  What a lovely ride, no dust, lots of fun, a little adrenaline rush, and a beautiful destination! 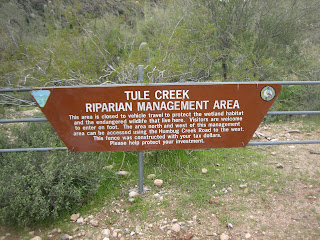 Posted by Arizona Backroads Girl/Scuba Mom at 7:44 AM No comments: 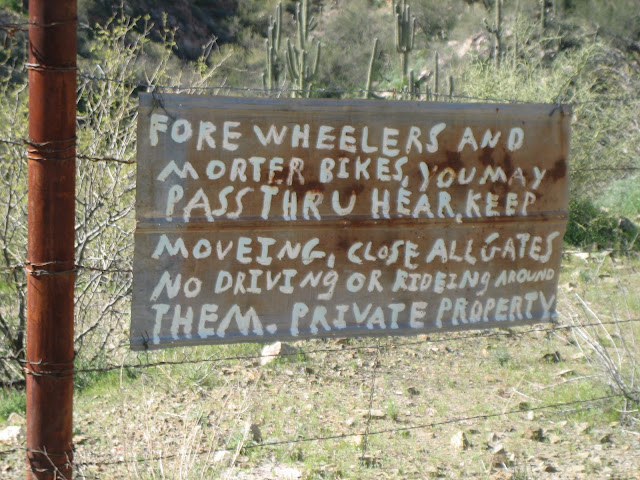 Hey - you Fore Wheelers and Morter Bikes...yes, you...you Morter bikes...you know who you are...


On Saturday, March 6th, Randy and I attended the 4th Annual Humbug Potluck Weekend.  It was glorious.  Humbug is a ghosttown I have been wanting to visit for just shy of 20 years. But it is private property.  You may visit by invitation only.  And by invitation, I mean you have to call Dave and ask permission, then he meets you up there, as there is a heavy steel gate across the entrance, and Dave will unlock it for you.  If you ain't invited, you'd better not be there.  For this reason alone, Humbug is a beautifully preserved ghosttown, with a rich, rich history, and lots to see!

However, due to my recent involvement in the Arizona Pioneer Cemetery Research Project, I was made aware of this very special weekend, once a year, where Dave opens up Humbug to visitors, with an open invitation.  Up until this year, Neal DuShane, founder of the APCPR, indicated that the weekends brought in roughly 30 to 35 people.  This year, Neal and I guessed there were at least 150 people.

The ride to Humbug was uneventful.  A high clearance two-wheel drive truck could probably make it with little trouble.  High clearance would be the key here, however.  But once we turned the corner past the gate, I gasped and started bouncing around on the back of the quad with eager anticipation of what was to come.

Buildings dot the hillside above Humbug Creek, which, due to the rain the past few weeks, was flowing beautifully.  There are buildings propped up with large timbers, there are buildings which appear to be abandoned and starting to fall apart...all are stucco.  All are adobe.  Most are double-stacked adobe walls, meaning there are two walls of adobe bricks with a space between.  Does wonders in the summer to keep the homes cool, and to keep the heat from the fireplaces in during the winter.

Dave Burns, caretaker of Humbug, greeted us as we crossed Humbug Creek (about a foot deep, maybe a bit more) and came up the beautiful stone fence-lined entry way past the stables.  After everyone took a few minutes to take it all in, Dave gave us a tour of Humbug proper.  His tour included the incredibly long history of Humbug, which started in the 1880's.  For more information on the history of Humbug, click here.  Neal has done massive amounts of research, and has put together a fabulous history of Humbug.


Dave spent hours talking to us about the history and everything he knew...he spoke to us of Charles Champie's home (the Champie's are Arizona pioneers, and their name is forever in the history books with regards to ranching in the lower Bradshaws), the 1920's partnership of Pat Fogarty and Frank Hyde (the big house pictured here is Frank Hyde and his family's home - the picture with me at the window is Pat Fogarty's home)

Dave spoke about the well, the mill, the different mines, the hardships and the booms.

Dave invited us to go up to the Pero Bonito mine, which was spectacular.  Periodically worked, the Pero Bonito is a well preserved mine from days past.  It is, however, on private property, and therefore its location and pictures of it will not appear on my blog.

Later in the day, after a leisurely lunch, a group of us chose to follow Neal up to the old site of Columbia.  Columbia was another one of the ghosttowns which had a caretaker, that I had been wanting to see for years.  Unfortunately, this time I was a few years too late.  The site of Columbia proper is now on BLM land.  And the BLM has razed all the buildings in Columbia.  All that is left are the palm trees that used to be on main street, along with some foundations, an old stone corral, and an arrastre.  Across the river is an old stone house rumored to have been a home, a post office, and/or a bar.  Who knows, it could have been all three.  Above Columbia and to the East is the "Gold Road" - a 4-wheel drive road that goes over the hills to Tip Top and Gillette.  This is where we found the sign above.  I will also note at this time that with the exception of one poorly marked BLM road, the roads into Columbia cross private property.  Do not attempt to enter the areas without permission.  Leave all gates as they were found, and respect these areas.  People live up here, and as Phoenix continues to encroach on the areas North of Lake Pleasant, more and more people are roaming around up there...please respect the fact that these areas are privately owned.  Many don't mind if you travel through, but they will if we do not respect the right of way they have given us. 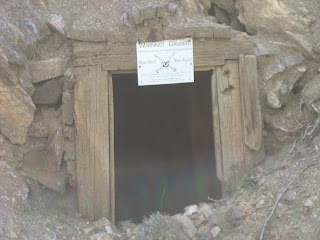 Back at Humbug at the end of the day, we all said our goodbyes, thanked Dave and Theresa for their hospitality, and started back home.  As the sun set, and we road our quad out, I felt a distinct sense of fulfillment.  I had seen one of Arizona's greatest historical treasures.  And most don't even know it is there.
Posted by Arizona Backroads Girl/Scuba Mom at 7:45 AM No comments: