Well we have the itch to go camping - to get out of the house, away from people, the tv, the computers and phones - but it's still summer here in Arizona - which means hot.  And it's August - which means hot AND humid!  But the annual Monsoon Duner Memorial Border Run was happening the first weekend of August, and I had never been, so as a tribute to Paul's best friend and someone I highly respected, Duner (Mike Schuette), we decided to go and hoped for the best with regards to comfortable sleeping.  We took both trucks this time because it was an AZFJ gathering, and we towed the camping trailer to sleep in.
We had been planning to take both trucks, hit up Nogales to pick up medications for my daughter before she heads to college, then head back up towards Sonoita near where our campsite was.  But at the last minute, due to what we perceived would be parking issues with a trailer, we chose to head to the campsite first, dropped off the Lewis & Clark and the Expedition (the trailer) and we took Calamity Jane to Nogales.
As we pulled in to Gardner Canyon dispersed campsite number 5, we met Jimbolio, who was our trail run leader.  Also at the campsite already was CrazyJohn, who we met for the first time - he was our camp host - he had a huge RV and an ATV, but he did not go on the run with us.  He hung around camp and watched everyone's stuff while we galivanted around southern Arizona for an entire day.  CrazyJohn is also the gentleman who fabricated my friend VaderGirl's current mods on Vader.
We quickly found a great camp location under a huge tree, and we dropped off Lewis & Clark and the Expedition and off we went to Mexico.  The weather was VERY nice, and it appeared we were going to get some rain.  And of course we did.  Just as we parked Calamity Jane and headed to walk across the border.  Thankfully, it was quick and easy as there are pharmacies right inside the gates, and the place I usually go was open and we were in and out with an entire years worth of meds for $200 (I would have paid $3,480.00 if I had used my insurance in Phoenix).  Meanwhile, its pouring rain, and I kept warning Paul that the sewer system on the Mexico side of Nogales is seriously lacking and to watch out for puddles, and we needed to get back across the border to higher ground before we had a flash flood that washed through Nogales/Mexico.  As we head back out to get in line to cross back to the USA, Paul noticed the water bubbling up and out of the sewer covers.  The flooding was starting and having been in Nogales/Mexico after a big monsoon, the last thing I wanted to do was get hit with a deep water trudge back across the border.  So we rushed to the border crossing, and for the first time in my entire 30+ years of going to Nogales, there was NO WAIT to cross back over.  The border patrol agents were hilarious and were extremely pleasant to deal with, and just like that, we were in and out of Mexico in less than 30 minutes, WITH our purchases!
We quickly made our way back up to where we parked Calamity Jane and we took off to head back to the campsite.  We noted all the canals and gullies were quickly filling up with water, and the Santa Cruz river was flowing/flooding.  As we headed North back towards camp, the rain let up, and we were left with a warm, sticky and humid evening.  If any rain had hit the campsite, you couldn't tell.  Dry as a bone.  But we got back before dark, and we made dinner (nachos!), and chatted with the other campers as they showed up.  Then it was movie night!  Jimbolio brings a computer, a projector, a "screen" and a little generator and we all gather around and watch a movie.  Dust to Glory was the movie about the Baja 1000.  It was interesting, but I got chilled towards the end and was tired.  So after it was over, we headed back to our little camp spot and crawled in the Expedition to get some sleep.  Now, it's still warmish and muggy - and then throw me AND Paul into a twin size sleeping arrangement, and it's not the most comfortable of evenings.  There were a TON of bugs out, so we closed up all the windows that did not have screens, but that left for poor air circulation, even with the fan, so towards morning, we opened it all up and blew the fan across the back of the trailer, which kept out the bugs, and let the cool air in.  Slept like babies for a few hours after that...
We woke up on Saturday morning, not quite refreshed, but somewhat refreshed.  I made bacon, eggs, and pancakes.  Mr. Spock, Jimbolio's fun little pup came over to investigate.  He will do tricks for bacon, so he got some really tasty applewood smoked thick cut bacon for doing tricks.  We were instant friends after that. 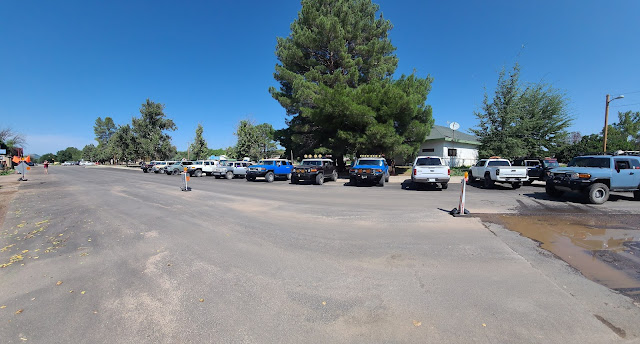