So today's final blog about the Memorial Day Weekend will be a tad bit different - today I'm going to talk about some cool stuff we saw over the weekend - but without divulging locations or "when" we saw it over the weekend.  There is too much destruction of these precious abandoned sites going on right now to give up locations of sites that Paul and/or I find through our hard work and efforts - and I would hate to see the amazing finds be totally destroyed in the next few years...

The first site is the above cabin.  It was a little hike off the trail - and we weren't sure if it was abandoned or not.  So we parked the FJ, and slowly and carefully walked back in the direction we thought the cabin was - the trail was grown over, but we saw what appeared to be a road, so we were cautious.  We made noise as we approached, but the front door was open, and we didn't see anyone in or around the cabin site, so we continued to approach. 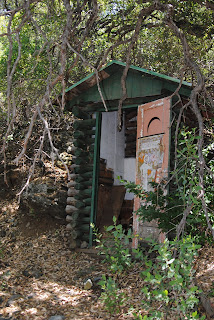 It is clear after a bit of snooping around that the cabin is abandoned, but the cabin building itself is posted no trespassing, so we did not go in.  It's a beautifully constructed cabin - not sure of the age - but there was an outhouse out back - very cute with a half moon cut in the door and news clippings pasted all over the inside.  Also did not go in here...didn't really want to see if it was used (recently or not).

As Paul continued around the side of the property, I heard him holler at me, so I turned around and he was pointing out the Scout II that was behind the cabin!  As we continued to look, I noticed another vehicle deeper in the weeds, and said "is that an 800A?"  Sure enough, it was!  What luck to find two International Harvesters while out and about - and then the truck we saw on Sunday as well!  Shows you how incredibly well made these trucks were to have withstood time and the elements to be out here!  The trucks are clearly not in working order - the 800A is pretty banged up and rusting, and while the Scout II doesn't look terrible, the windows have been left open and weeds are growing out from inside the truck!  But I was excited to see them nonetheless.  Paul said there were other Scout parts lying around the 800A...he knows my brother and I love International Scouts!

There was a ton of trash lying around this cabin site, and as always, we poked through it.  Kerosene cans, old cookie tins (lots of them), old bottles and lots of broken glass.  A number of old beds and frames, and several pairs of pants with tags still on them.  Odd.

We slowly walked back to the FJ, wondering who lived here, who owns the place now, and what are they doing with it.  I've since found out who owns the cabin and trucks through some detailed research, as well as the nearby mine that is associated with the cabin.  These kinds of finds are the finds that make my day!  Pristine cabins, beautiful in their settings, with lots of remnants of things from the past just waiting around it - they make my day!

And now for something that makes Paul's day!  Mines - Paul LOVES abandoned mines.  I mean, I love finding them, learning about their history, poking around the remains ON THE OUTSIDE.  But Paul likes to explore them.  ON THE INSIDE.  I will rarely go in a mine.  Don't get me wrong - he's safe, and doesn't go in anything that looks remotely unsafe or unstable, but we've been out a number of times now where Paul has gone into a mine and I've waited outside.  Hoping he comes back out and I don't have to manage the FJ back to find help (although I suspect I could manage it just fine now if necessary).  He, of course, always comes back out - with awesome pictures, and then I wish I had the guts to go in - but I don't.  I likely never will, so I'll be the "look out" on the outside, waiting for safe return.  We plan to drag my brother along at some point as well - he's a little crazy like that too.

But at one point on this weekend, Paul found a mine that he went in to.  I'm not posting pictures of the outside so as to preserve the identity...and Paul did not descend the ladders at all - we need a second person on the inside with him, as well as me on the outside - but it looked promising!  I really like this picture on the right because if you zoom in to the bottom of the photo you can see another ladder at the bottom of this permanent ladder.  And it looks like the Upside Down from Stranger Things.

We heard about this mine and decided to do some searching for it, and found it!  It was an interesting find, because the mine itself has been around since the 1920's, and was part of a group of claims - but was primarily an open pit mine until the 1980's, when a shaft was dug at the location of the original pit mine.  The pit area itself looks the same as it did decades ago - you have to look around for the entrance.  But it's there...Paul found it.  And after letting his eyes adjust to the lack of light, he was able to look around a bit.  Hopefully there will be more exploration to come...with my brother in tow.  Paul and Cabot can explore the mine - I'll do the research!

Final Trek Down from Crown King

So our wonderful weekend had come to an end.  We took the front road down from Crown King - down the old train switchbacks where I showed Paul how the trains would go straight off the switchback, switch tracks, and go up (or down) the next switchback.  At one point we could see the cuts in the rock that allowed the train "switch" tracks.

We stopped to look at the Swastika Mine, which is just below the Peck Mine (not abandoned, and the caretaker isn't one to mess with), and then we came around the corner to see the DeSoto Mine - it's a mine I've always wanted to see, but we need to plan that for another day - not sure how the road is, and there is plenty to see on the way up to the mine.  You can still see some of the tramway foundations, although I didn't see the wooden tramway structures - I haven't seen them in over 20 years, so I don't know if they still exist or not.  They did in the 1990's...but the rock foundations are still there.  You don't even realize what you are looking at unless you know.

We half-heartedly attempted to visit a few more places I had marked on my Gaia, but all were gated and locked, and we made no attempt to find alternate routes (although there are alternate routes to most).  We decided to take the Maggie Mine Trail back in to Black Canyon City to get just a tiny last bit of dirt fun - the trail was tame, but fun, and it's always exciting to see it in daytime (last time I ran the Maggie Mine I did it at night - by myself).

And as per the usual, we ran in to traffic on the I-17 coming back in to Phoenix - but what a great weekend we had.  Relaxing, fun, I learned how to drive Paul's FJ, I learned some about what the FJ could do - and am now excited to take Calamity Jane out and try her out on a few obstacles!  Good food, cool mountain air, and wonderful company!

Welcome to my amazing, awesome and fun life!

Posted by Arizona Backroads Girl/Scuba Mom at 10:11 AM