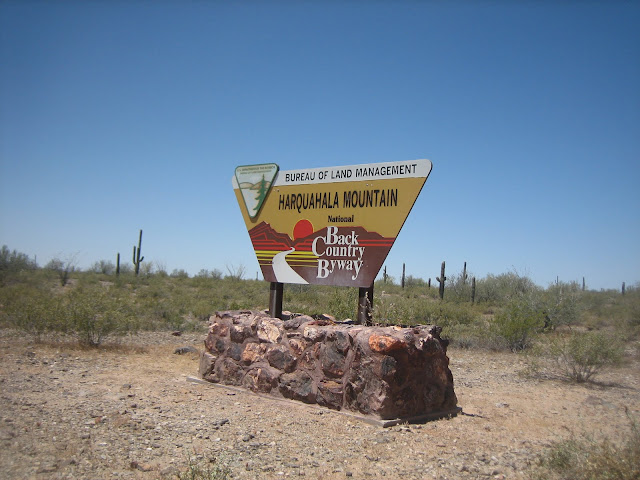 Well, it is getting hot in Phoenix.  We've reached 100 degrees a few times, and Sunday was going to be hot.  But we wanted to get in one last ride before the scorching desert temperatures keep us from riding the quads for 5 months.  So we woke the girls up early, and went out to try a trail we had tried before - one that I hadn't been able to complete because of the steep and rocky terrain, and because I had been on the little quad.  We borrowed our friend Butch's quad again, and we were at the staging area by 9 a.m. or so (later than we wanted, but still early enough to be comfortable in temperature).  We knew it was a short trail (10 miles) but you also ascend roughly 5000 feet in elevation in that short 10 miles.  Up, up and away.

The ride up was uneventful.  Towards the top, we reached the paved section that I had read about.  The road to the Observatory was washing out, so the BLM (Bureau of Land Management) paved a short section of eroded road that is steep.  I knew we were almost there, and looked up, and low and behold, we could just see the top of the structure over the little ridge.

We continued up to the established parking areas (there are three, with picnic tables, camping areas, and all).  The BLM has put up informational signs and a visitors booklet to sign.  The picture to the left is of the croquet court at the Observatory.

I suppose I should give you a little history of the Observatory itself. Harquahala Peak Observatory was built in 1920 by the Smithsonian Astrophysical Observatory to measure and record solar activity.

Although deserted now, from 1920-1925 a group of scientists (and one of their wives) lived and worked atop the highest mountain in southwestern Arizona (5681 foot elevation). At the time, it was about an hour's drive from Wenden, Arizona, to the mountain, with a 3-hour hike to the top of the peak. Burros were used to pack building supplies, living supplies and equipment to the mountaintop. Most difficult of all to transport were the delicate recording machines and laboratory equipment. Even water had to be transported by burro until collection tanks could be built.  We read about the life of Chella Moore, the wife of Alfred Moore.  It is  because of Chella Moore that there is a croquet court, a well, a refrigerator, and even a telephone at the Observatory.

The "tin shed" that you see now is just a cover to protect the original, two story building at the Observatory.  The original structure, which is, I believe, adobe, is too unstable to allow visitors inside, so the BLM has fenced it, covered the structure with a protective metal "outer" house, and locked it all up.

We poked around for a bit, reading the informational signs, looking at the well and other items around the Observatory.  We rode up to the cellular towers and looked at the solar collectors, explaining to the girls what they were for.  Then we decided it was getting hot, even up at the top, and that we needed to head down soon.

On our way down both Randy and I heard a very loud rattle over the sound of the quads.  We both slammed on our brakes, skidding to a halt.  Up on the ledge above us (but far enough away that we were still safe) was a 2-3 feet rattlesnake.  The girls could even hear him rattling above the engine noise of the quads and with their helmets on.  It was the only snake we saw all day, surprisingly enough.

The views of the Harquahala Valley were beautiful, but again, we were all getting hot, so we hurried down to the truck.  We noticed that all the sahuaro cactus' were in bloom and looking particularly lovely.

Then, at the bottom as we were preparing to load the quads onto the trailer, we noticed the flat tire on the trailer.  Not a little bit flat, but completely down.  So there in the hot desert dirt, Randy and I changed the tire on the trailer.  The girls sat in the truck, because of course there was a huge hornet nest by the staging area, and another bee hive over by the bathrooms.  There were stinging insects everywhere, as well as an unbelievable amount of gnats.  I have no idea where the gnats were coming from.  There was no water source...but they were seriously annoying.

After changing the tire and loading up the quads, we decided to drive into Salome and go look at a cemetery that I remembered from about 15 years ago.  We ate in the car, and asked someone at the Salome bar for directions.  Unfortunately, I didn't realize there were two pioneer cemeteries out there.  The one I remembered was on a well graded dirt road that led back to I-10.  The one we received directions to was, well, not the one I remembered.


As we drove down Salome Road to what we now know is the Harrisburg Cemetery (we meant to go to the Harquahala Cemetery and mining ruins), I said to Randy "I don't think this is the right road...I don't remember it being this bad."  We came up to a wide river wash crossing.  It looked really sandy, but clearly people had been driving through it, as there were tracks everywhere.  SO - still pulling the quads in the trailer, Randy decides to go across it. 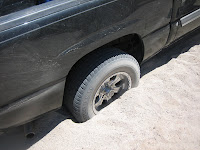 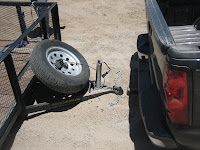 Ooops.  It was really soft, and really deep.  The wash was maybe 50 feet across.  We made it almost all the way before we finally buried the back tires up to the axle.  We were stuck.  And hot.  Thankfully, we had TONS and TONS of water and snacks...leave it to Bobbi to make sure we have plenty of water and food!

Leaving the girls in the truck (with the air on, obviously), Randy and I unhooked the trailer (after digging out the trailer hitch) and with both quads, we pulled the trailer out of the wash and up to a staging area we had passed just before the wash.  We even tried to pull the truck out with the quad.  But we just dug it deeper and deeper.  We called some friends of Randy's to come pull us out, but it would be at least two hours before they got there.  Thankfully, we had cell service, and were only 5 or 6 miles from town.  I knew all would be okay, because worst case scenario, I would ride both girls into town on a quad and hang out at the bar until someone rescued Randy. 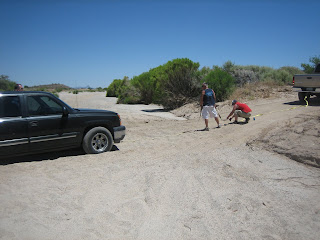 As we sat waiting, some folks in a couple of UTVs came riding along.  They looked at the truck and laughed and said "are you stuck?"  As it turned out, they were all Salome firefighters who lived just around the corner.  One of them had a large Dodge 4-wheel drive, and went to get it to pull us out.  While we waited, one of the wives offered to take Bailey, Raquel and I up to the Harrisburg Cemetery so we could at least see the Harrisburg cemetery.  As it turned out, we were stuck less than a mile from the cemetery.  So while Randy was being pulled out, us girls went up to the cemetery, and Randy joined us shortly after. 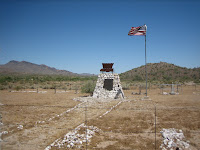 The cemetery was well taken care of, and at least one of the firefighters was part of the group that put the new monument up in 1985, after the original one had been stolen in the mid to late 70's.  They had lots of stories to tell us, and we enjoyed hearing all about them, and getting a tour of the cemetery.  The town of Harrisburg is no longer, and there do not appear to be any remains, but one of the firefighters said that when he was growing up, there were still covered wagons and buildings everywhere out there.  Now, there are tons of ranches...

On the way back, everyone was taking bets as to whether or not we'd make it across the wash again, but we made it across without even one slip of the tires (we didn't have the trailer or quads attached, which is why).  We loaded up the quads and the trailer, and Randy and I decided to head home...I still wanted to go see the other cemetery, but in light of the fact that we'd had a flat tire and gotten stuck already, we agreed it was best to head home.  On the way home, we got a great invitation to go jump in my mom's pool and have dinner.  What better way to clean up from a hot day riding the quads than to jump in a cold swimming pool?

So today's lesson...always have a spare tire for ALL vehicles, and never underestimate the weight of the trailer with quads.  It WILL drag you down.  Oh, and always carry plenty of water.  More than you need for just your ride - you never know when you might get stuck.

Happy Memorial Day, and thank you to all who have served our country and keep us free!  America owes you!

Posted by Arizona Backroads Girl/Scuba Mom at 7:45 AM